TIPS ON MOVING WITH THE KIDS

Welcome to a New Year, since it’s the first month of the New Year some of us might have already had a move to a new home planned for this month in order to have a fresh start.

Have in mind that moving is a very difficult phase especially when the kids are involved, this is because many kids thrive on familiarity and routine, so as you consider a move weigh the benefits of that move against the comfort that the already established surroundings, school, and social life have given your kids.
A decision to move may be caused by different reasons. The decision to move might however be out of your hands probably due to a job transfer or financial issues, even if you’re not happy about the move try to maintain a positive attitude about it because parents’ moods and attitude often have a great effect on the kids.

PREPARING THE KIDS FOR THE MOVE
The most important way of preparing kids for a move is discussing it over with them. Try to give them as much information about the move as possible and answer all questions they ask truthfully. Also involving them in the planning as much as possible makes them feel like participants in the house-hunting process or school search. This can make the change feel less like it is being forced on them. If the property you are moving to is close by then take them to visit the site and neighborhood.
MOVING WITH TODDLERS 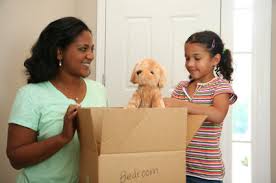 Kids under the age of six can be the easiest to move as they barely understand the changes involved but still your guidance is crucial.

Here are some tips on easing transition for young children.

Keep explanations clear and simple.
Use a story to explain the move through toys, furniture or acting it out
When you pack your toddler’s toys in boxes, make sure to explain that you aren’t throwing them away.
Hold off on getting rid of your child’s old bedroom furniture, which may provide a sense of comfort in the new house. It might even be a good idea to arrange furniture in a similar way in the new bedroom
Avoid making other big changes during the move, like toilet training or advancing a toddler to a bed from a crib.
Arrange for your toddler or preschooler to stay with a babysitter on moving day.

MOVING WITH TEENS
It is common for teens to rebel actively against a move. This is because your teen has probably invested a considerable energy in a particular social group or might be involved in a romantic relationship. A move might mean that the teen might miss a long awaited event.
It’s particularly important to let teens know that you want to hear their concerns and that you respect them. It’s important to suggest that the move can serve as rehearsal for future changes, like college or a new job. However, also be sure to let them know that you hear their concerns.
After the move consider planning a visit to the old community if it’s feasible.

If you’re moving midway through a school year, you may want to consider letting the older teen stay with a friend or relative in the old location if that’s possible.

A move can present many challenges, but good things also come from this kind of change. Your family might grow closer and you may learn more about each other by going through it together.
Have a nice day.